“Ladakh School Olympics-2018 is the best thing that has happened to Leh in a very long time,” Chief Secretary said while addressing an enthusiastic gathering of sports persons and school children at the closing ceremony of the Ladakh School Olympics at NDS Stadium here on the conclusion of his 2-Day extensive visit to the district.

Chief Secretary, who was the Chief Guest at the function, complimented the efforts put in by LAHDC Leh, District Administration and other organizers for showcasing such a high quality and professionally conducted the event. He especially appreciated the equal participation of girls in the local Olympics which he said is a sign of gender equality and urged the girls to continue their sporting career even after school.

Giving example of Manipur as a state that has excelled in sports, Chief Secretary said that Ladakhi people being resilient, tough and living at a high altitude can excel in professional sports. He asserted that sports will energize the youth and push them towards achievement not only in Ladakh but in entire J&K and get glory to the nation. He said that Hill Development Council and the district administration have taken the first step in this direction by organizing the Ladakh School Olympics.

Chief Secretary committed to sanction a lump sum amount to Hill Council to complete some substantial amount of work in creating good sports facilities in Leh. He also assured support in fulfilling requirements of training centres and other facilities in promoting sports in Ladakh. He suggested to the DC to create a secretariat and institutionalize Ladakh School Olympics for making it an annual event.

Earlier, EC Tourism, Tsering Sandup presented welcome address, while DC, Leh Avny Lavasa giving a brief background of Ladakh School Olympics said that this initiative has set a good benchmark that will help to inspire it as an annual event to create legacy.

A cultural program was presented by students of CIBS, Choglamsar and Kungfu dance by students of Druk Padma Karpo School, Shey.
Boys Higher Secondary School, Leh was awarded the trophy for overall champion in the boy’s category and Delhi Public school was awarded the overall best school.
Chief Secretary presented trophies, medals and certificates to the winners.

The Chief Secretary wad informed that around 2000 children from 111 schools in Ladakh participated in 19 sports and athletic events in the 5-day long Ladakh School Olympics. 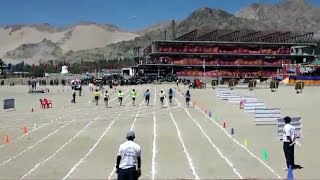